This is the seventh part of our Batman Week series, where we review a collection of Batman films leading up to our review of video-game Batman: Arkham Knight, due to be published on 27th June. To check the schedule or read previous reviews in the series, click here. 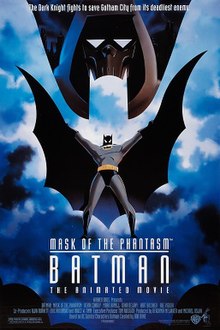 Batman – Mask of the Phantasm leads on from the critically-acclaimed Batman: The Animated Series, retaining many of the same voice actors and crew members. In this adventure, Bruce Wayne/Batman (Kevin Conroy) is framed for a series of murders on Gotham’s mob bosses, which were actually committed by the Phantasm (Stacy Keach), and in a bid to stop the killings and prove his innocence, has to fend off not only arch-nemesis The Joker (Mark Hamill) but also councilman Arthur Reeves (Hart Bochner), all while reconciling with former flame Andrea Beaumont (Dana Delaney).

The plot of Batman – Mask of the Phantasm is easily the film’s strongest point, and helps it stand out as one of the Caped Crusader’s greatest big-screen adventures. Unlike the Burton films which had come before it, that primarily focused on the villains instead of devoting time to Batman himself, this film is rife with flashbacks detailing how and why Bruce Wayne put on the cowl and became Batman, and it really helped flesh out his character and made the whole film more believable, especially allowing the emotional moments to pack more of a punch. The origin scenes are brilliantly done and at times are incredibly emotional, and I believe the origin told here is on a par with 2005’s Batman Begins. Although the third acts ends up as a bit of an action-frenzy, the film is rife with character development, delving into the past of not only Bruce Wayne but also original character Andrea Beaumont, who you come to care about, particularly towards the end. The film’s plot is a lot deeper and human than not only most animated Batman films, but the live-action films too, beaten only by Nolan’s Dark Knight trilogy, and although I wasn’t expecting it, deeply appreciated it. When the true identity of the Phantasm is eventually revealed – don’t worry, I won’t spoil it here – you definitely don’t see it coming and it packs one hell of a punch, and gives the character in question much more humanity than before, actually making you feel for them. The story of Phantasm is remarkable, and is easily the best part of this film, and at the time, helped make it the best Batman film thus far.

The characters, however, are not always able to remain on a par with the plot. Obviously, Bruce Wayne/Batman is fantastic, easily the most fleshed-out and human character here, and thanks to plenty of flashback scenes and inner monologues – compounded by Kevin Conroy’s superb performance, which I would say is his best ever – make the eponymous hero the film’s best asset. Other characters such as The Joker are fantastic here too, with Mark Hamill’s performance as terrifying and deranged as ever, and thanks to The Joker’s devilish design as well, make him a truly fantastic villain. However, the Clown Prince of Crime is not the main villain here, for it is the Phantasm that takes the limelight. Designed brilliantly to look like a polar opposite to Batman and with brilliant voice acting, the Phantasm is terrifying and threatening, finally giving Batman a foe that is on a par, making their meetings a lot more tense. However, I felt that the film tried to introduce too many new characters into such a short space of time, which ended up making the plot feel bloated. We meet a wide variety of mob bosses and some of their relatives for the first time here, and it’s a lot to take in, especially when considering the film is less than 90 minutes long, making the scenes that are trying to tug on your heartstrings a little less effective.

As with Burton’s Batman films and Batman: The Animated Series, the design of Batman – Mask of the Phantasm is incredible. Batman’s costume is classic and timeless, clearly showing lots of respect for the source material, making this the definitive animated Batman. His city – Gotham – is stunning as well, with the timeless design of buildings and vehicles meaning this film could be set whenever – a true classic. The music is brilliant too, and although Danny Elfman’s formidable score isn’t used, the soundtrack still packs a punch, particularly with the choir singing hauntingly throughout the film’s tensest and most emotional moments. The tone, like Burton’s films and the TV show, is incredibly dark, and there is a surprising amount of blood for a PG-rated film, but it proves that the filmmakers weren’t afraid to follow through with their designs even if they weren’t the most marketable, unlike Schumacher’s kid-friendly entries. Some moments are terrifying, and it is all intensified by the bleak tone and brilliant performances.

For its time, Batman – Mask of the Phantasm was a triumph, better than anything we had seen before of the Caped Crusader on the big- and small-screen, and it pleases me to say that it is as ground-breaking today as it was in 1993. This is the definitive animated Batman adventure, and comfortably the best Batman outing for its era, and I highly recommend that you watch this dark, character-driven and marvelous classic.