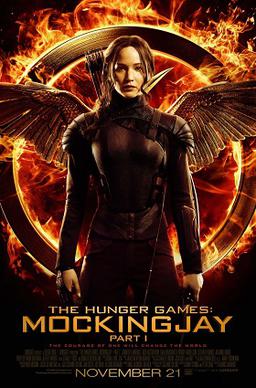 You know, you’ve really got to give the Hunger Games franchise some credit. What started off as a reasonably well-received young-adult novel series had become one of the most successful film franchises of all-time. The films have made a worldwide superstar of lead Jennifer Lawrence, have reeled in Hollywood legends such as Philip Seymour Hoffman and Julianne More, and have an incredibly dedicated fanbase frothing at the mouth for the final instalment, Mockingjay – Part 2, out this November. And all these reasons were why I came out of Mockingjay – Part 1 somewhat disappointed.

The film picks up straight after the events of the second instalment Catching Fire, with Katniss (Lawrence) recovering in the fabled District 13 after the abrupt ending of the 75th Hunger Games, where her partner Peeta (Josh Hutcherson) was abducted by the tyrannical Capitol, headed by President Snow (Donald Sutherland). In District 13, she is convinced by President Coin (Julianne Moore) and Capitol whistleblower Plutarch Heavensbee (Philip Seymour Hoffman) to become the Mockingjay: a symbol of revolution to help return peace and democracy to the people of Panem.

However good this may sound, don’t get too excited, because very little actually happens in this film to further the main arc. The curse of the new trend of splitting final chapters into two parts is that the first part usually doesn’t do much to advance the plot, and I’m afraid to say that’s partly the case here. Most of the action takes place in District 13 – a place of tight corridors and interiors that feels really drab – but action is the wrong word to describe it because there really is very little action. Aside from a 5-minute chase scene halfway through and a 10-minute rescue mission right at the end, the film consists of dialogue and dialogue only.  Mockingjay – Part 1 lacks the grandiose and spectacle of the other two films and the series, but it’s not too sorely missed: yes, the film’s start is incredibly jarring and the script does a poor job of catching viewers up if they haven’t rewatched the previous films, but the character-driven and tighter narrative really help flesh out these characters. I can’t help but think that what could’ve been accomplished in 30 minutes is stretched into a 2-hour film: the main plot point is that Katniss becomes the Mockingjay, and although it is done with plenty of depth, one could argue that there was no need for its own film. That said, despite the fact that the overall plot of the Hunger Games series is barely furthered, this film does provide some nice context and definitely delves deeper into these interesting characters. It may do little to advance the plot, but some character development is just what this series needs, so I can’t complain too much.

This series of films is synonymous for its stellar cast, and additions in Mockingjay – Part 1 only make it better. Jennifer Lawrence once again is the star of the show as Katniss, stealing every scene she is in, even from greats such as Julianne Moore. Lawrence’s performance is powerful and wholly enchanting: she really knows the ins and outs of this character after three years of playing her, and thanks to the tighter plot she really gets to flex her acting muscles. When the plot falters, Lawrence is always there to pick it up and dust it off, and she is easily the best thing about this film. You either love her or you hate her, but it’s nigh-impossible to consider her a bad actress after this stunning performance. The supporting cast are great too, with my particular favourites Philip Seymour Hoffman as Plutarch Heavensbee with a fantastic, witty and moving performance, and Elizabeth Banks as Effie Trinkett, a role very far-removed from her normal stuff, but something she excels in, delivering brilliant comic relief just when needed in this deliciously dark film. Josh Hutcherson is also good as Peeta, and I particularly enjoyed seeing the gradual deterioration of his character throughout the film, not just physically but through Hutcherson’s layered performance. The rest of the supporting cast is solid, but nobody else really stands out as great, and there were no poor performances that I felt dragged the film down whatsoever.

Although I imagine a lot of this film’s $125 million budget went straight into the pockets of its stars, the production values of Mockingjay – Part 1 are also pretty good. The sets are really well-designed, especially when events unfold outside of District 13, with some lovely exterior sets that look convincing and provide the actors with something to work with. The cinematography is also pretty good, with some lovely establishing shots of the war-torn Panem landscape and some shots that come across as quite unsettling, particularly towards the end. The CGI is unsurprisingly fantastic, as is the sound design, but for a big-budget film like this it’s hardly a surprise.

One of the more interesting elements of this film is how far it strays from the formula of the previous two: there’s far less action, no actual ‘Hunger Games’ at all, and definitely takes a more militaristic and somewhat relevant stance. It’s hard to consider this a young-adult film since it deals with some really interesting issues that are relevant to our world: the idea of dictatorships and rebellion is something regularly in headline news, and it’s really interesting that a film designed mainly for teenage girls has the balls to do this, so hats off for that.

Out of all the films in the series so far, Mockingjay – Part 1 is easily the hardest to review since it’s so different from its predecessors: it’s got almost no action, has a completely different, somewhat militaristic tone and tells a much more character-driven, tighter story. Yes, it’s true that this film wasn’t necessarily required, but the good performances manage to hold my interest despite my hunch that we could’ve had this story already wrapped up already. Yes, it’s a tad superflouous, but Mockingjay – Part 1 is a good watch regardless.